PAINTING ON THE I-PHONE

Another day, another hospital waiting room - but also another chance to do some quick sketches, though today I'm trying them in a different way.

A couple of months ago I bought an I-phone, and am completely besotted with it.  I've been learning how to use my drawing/painting app, and thought that it was time to try quick 'painted sketches 'on location' instead of pen and paper.

OK, this is the first one.  I don't suppose the elderly lady would feel flattered, but I was quite pleased with what I achieved at speed on the I-phone's tiny 2" x 3" screen. 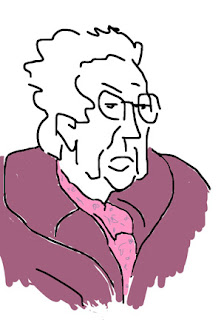 I prefer the looseness of that image compared with this one, where I was trying too hard. 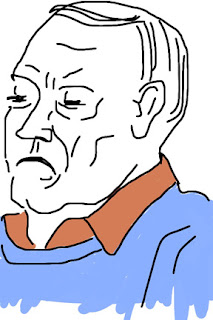 A clinic like the one we were in entails a fair bit of waiting, which has the advantage that people don't tend to get up and walk away. 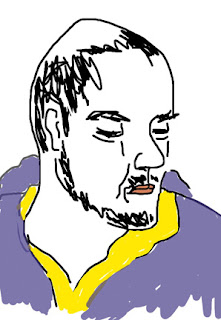 I should apologise to this chap, he was rather bald, but he really didn't have a pointy head - but I just accept what I draw in the first place.  It helps that most people are reading or playing with their telephones. 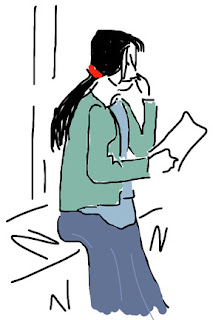 I was pleased and surprised to discover that while people often don't seem pleased if they notice me drawing on paper, the sight of an I-phone doesn't seem to suggest that I'm sketching, even if I glance at them now and then. 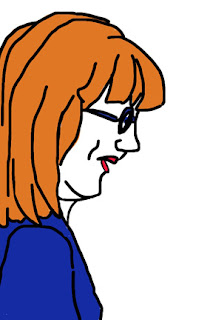 I realise that although I sketch on the phone quite quickly, I then spend too much time trying to paint the colours inside the lines really well.  In fact, I think this kind of sketch looks better with gaps here and there.

Now the last one is my favourite.  He did have a floppy had like this, but neither the hat nor his nose were red, I just couldn't resist. 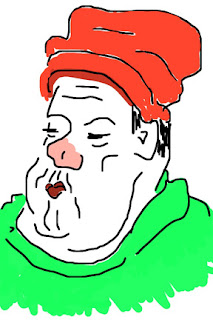 All in all a rather enjoyable morning!  And time passed much more quickly than usual, so the pen and paper will be left at home in future.

Does anybody else out there paint and draw on their I-phone?
Posted by Jez at 08:00

Email ThisBlogThis!Share to TwitterShare to FacebookShare to Pinterest
Labels: Sketching