HAPPY NEW YEAR TO EVERYONE

Here is my card to wish all wonderful blogging friends the best of years in 2014, with a good share of joy, love, happiness, success, friendship …….. and perhaps even a little bit of World Peace thrown in.

In what has been a difficult year for us right through, as it has for many others, you have all brought me Joy and Pleasure, and I hope that 2014 will be a little easier for us all.
The snowflakes were created on a little app called 'Silk', which I enjoy playing with.  Everything else was done on Photoshop.

Apart from 'Happy New Year', the words are by Henry W Longfellow, though I'm sure he must have said Happy New Year a good few times in his life.

And this is my 6" x 4" New Year's wish postcard to everyone at Sunday Postcard Art:

I'm linking this to Moo Mania 'Snowflakes',  Take a Word 'A New Year', Inspiration Avenue 'Joy to the World', Paint Party Friday and Sunday Postcard Art 'Anything Goes'.
Posted by Jez at 15:15 18 comments:

THIS IS FOR TRACEY!

I've created one of my Doggerel Doodles as my 'good wish' Christmas card for Tracey as my piece for the Paint Party Friday surprise 'Tea Party for Tracey'.  Here's my 'card':

A NURSERY RHYME FOR OUR TIMES

"Polly put the kettle on",
That's what her mother said.
So Polly did as she was told,
And put it ON ……… HER HEAD!

I don't know how it happened,
(Though her hair IS fiery red),
For the kettle boiled in no time,
And "Well done!" her mother said.

Poll put the teabag in the pot,
On a doiley nice and lacy,
Then took it in the living room
And gave it to Our Tracey.

Paint Party Friday asked us to create a tea-themed piece , and it's been a secret for several weeks.  PPF have collaged together the pieces everyone taking part has sent in, and we have been asked to post our own picture on 20th December to celebrate the 'uncovering' of the event.  It's been fun.

Happy Christmas Tracey and may you and yours have a happy holiday.

NOT A LEAP, BUT A STEP FORWARD

Creativity this week has been more of a spurt than a leap, with three quick drawings but I was determined to draw something.  This coloured pencil picture was developed from a blind drawing and a continuous line drawing made in the Atkinson Gallery.

We had an appointment in Southport and had arrived in town with half an hour to spare.  I suggested going into the Gallery to pass the time usefully and to get away from the viciously cold wind.  We usually have our sketchbooks with us 'just in case', and in the gallery I looked for something quick and easy to draw.

This is where my coloured pencil drawing started, with a completely blind drawing of part of the main figure of Edward Wolfe's painting of 'Mohammed Ben Laitzi'.  It takes a great deal of concentration and one of the gallery staff said she spoke to me to ask if I needed a chair, but realised that I hadn't even heard her because I was 'completely in the zone' as she put it!  Nothing like the original painting, but that's not the intention, and I like the face that is hiding inside all the scribble.

At this point the gallery girl kindly brought me a chair anyway.  This time I attempted Mohammed with a continuous line drawing.  Once again there was only a vague resemblance to the original, but I was really captured by the face that had appeared and wanted to develop it a bit further to produce an image inspired by these two sketches.

I changed the face and head quite a bit from the continuous line sketch to produce the picture I wanted, and decided to stick to various shades of brown - unusual for me. Without the process of the two line sketches I would never have achieved this unusual face, and I'm really pleased with it.


On Wednesday at the hospital clinic yet again I made an I-Phone drawing to pass the time away.  Not marvellous, but perhaps I can feel the sun coming up behind the grey clouds!

STEPPING BACK, THE BETTER TO LEAP FORWARD!

Last Saturday I decided that I needed to step back for a little while to catch up on life and get Dev through the antibiotic stage.  Thank you to everyone who sent good wishes to Dev - I read them to him and I'm sure it helped him to get over a very testing time.  Fortunately the worries from each clinic came back clear, so we are both relieved.  So, just one more clinic visit next week and hopefully nothing else before Christmas.

I waded straight into giving the flat a thorough clean instead of the lick and promise it has been having, and felt much better for it.  Doesn't take all that long in a flat, which is a great advantage of apartment living.

Apart from Dev's routine visit to the hospital on Wednesday, which takes a whole morning, I decided the rest of the week would be mine to do just what I wanted.

Every day holds something to lift the heart and bring a smile, and Wednesday morning was no exception.  As I drew into a space in the hospital car park, right in front of the car was a cherry tree in full white blossom, so beautiful.  This is my favourite parking space, in front of the lake.  In the photo you can just see a swan, and on the opposite bank a heron posed as a grey statue.  Enough to lift the heart all day.  I took a quick snap of the sign that is permanently fixed to the railings.  It always makes me smile, the two statements seem so contradictory.

'Me time' in the afternoon, but no drawing, no painting.  I did something I've wanted to do for quite a while.  I've had a long traditional Nigerian dress hanging in my wardrobe for over 30 years, and apart from a few times in the early days I never wear it.

There's a story behind the dress.  I was on a business trip to Nigeria and was taken by a Nigerian acquaintance firstly to choose a fabric I liked, and then to a dressmaker to have a traditional dress custom-made to my size.  The fabric was beautiful, but when I received the dress the extensive embroidery at the neck and in a wide strip of embroidery at the hem had been sewn with a shocking fluorescent green thread and the colours clashed violently.  I was so upset, it was completely spoilt.

Fortunately a colleague decided that he'd like to take a dress home as a gift for his wife, and I sold it to him at a knock-down price.  Hope she liked the colours!  I bought an off-the-rail dress in a tie-dye fabric, much cheaper quality fabric, a standard size and not too well made.  Still it held many memories of the trip, and I have kept it all these years.

But I wanted to clear the wardrobes a bit, and I needed a couple of new aprons.  Time for some recycling.  I managed to squeeze two aprons from the dress, and the hems still have the original stitching as a memory of their origin.  The photo shows the first one, and the second one is not quite completed. 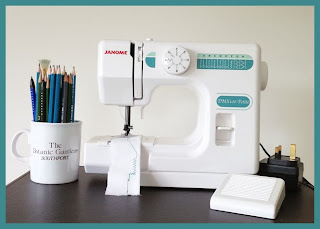 Both aprons were made on the tiny Janome sewing machine I bought a few months ago, so it proved to me that it can certainly sew through a few thicknesses of fabric very well.

Last night I was up sleepless for a couple of hours, and for some reason I thought about the Dorset Apple Cake I used to make years ago.  I started searching the internet for the recipe but couldn't fine one the same as I used to have.  I did find a recipe for an 'Easy Apple Tea Loaf Cake' which appealed, and this morning I decided to make it.

I bought a new electronic scale yesterday, which is very neat, slim and precise and just 7"square, which was fortunate because the quantities in the recipe were only in grammes.  The cake was very quick and easy to make, though I wasn't convinced the recipe would work when I was mixing it.  But here it is:

I seem to remember reading years ago that the split down the middle is a feature of apple cake.  Anyway, it's a feature of this one.  A smaller loaf pan would be better because the cake was only a couple of inches high.

How did it taste?  Absolutely delicious, and we ate almost half of it after our lunch.  I'll either double up the quantities next time or find a smaller loaf tin.

Yesterday I also bought a silicon loaf pan, but when I came to use it I couldn't decide whether it should be greased it or not, so I used my old tin loaf pan.  What do you do if you use a silicon cake 'tin', do you grease or not?

So I have created this week, but just not on paper.  It's been a happy week and I feel refreshed and ready to get the pens and paints out on Monday, so it was well worth stepping back for a few days.