This month's review for Darcy's Artful Readers Club is short and sweet, rather like the book itself.  And by sweet I don't mean cloying but tender and loving.  It's MY LIFE by MARC CHAGALL.  For once it's not a Kindle book but a paperback from Amazon at £7.59.

'My Life' covers the period of Chagall's life from childhood through to 1922.  He finished writing the book in 1922 but it was not available in English until 1965.  He was born in 1887 in Russia as Moyshe Segal, and lived until 1985.  Unlike many artists he died at 98, a respected artist and a millionaire.

I found the book on Amazon when I was about to go on a Summer Art School at the Tate Liverpool in connection with their marvellous Chagall exhibition, and reading it has been a joy.

It's a short book, only 171 pages which include 20 of his black and white sketches from that period of his life, many of them full-page pictures - so you can see why I say it is short and sweet.

The language is simple, the writing unusual like flashes or snapshots of memory, very reminiscent of some of his paintings. It's like poetry, painting pictures with words.  As well as having touches of humour it is tender, touching, sad, so many emotions in this little book.

One of the things I liked was how some of his comments helped me to understand elements of his paintings that are little miniature memories within the painting.  He says of his childhood thoughts:

"Sticks and roofs, beams, fences, and everything that lay behind, delighted me.  And you can see what was there in my picture 'Above the Town', or else, I can tell you ......'

Then there are paintings where a head is detached from its body, floating in the air and it helps to see the links with those paintings when he says:

"At those words, my head gently detaches itself from my body and weeps somewhere near the kitchens where the fish are being prepared."

I had already worked out long ago that when bodies are floating in the air in his paintings he is expressing deep emotions, but it seems he felt and imagined in this way even as a child, a strange and imaginative child who always had his own vision and was determined to paint in his own way.

One more detail that linked so strongly with some of his paintings.  Writing of his schooldays he says:

"What I liked best was geometry.  At that, I was unbeatable.  Lines, angles, triangles, squares, transported me into the realms of delight.  And during the drawing period, I had everything but a throne." 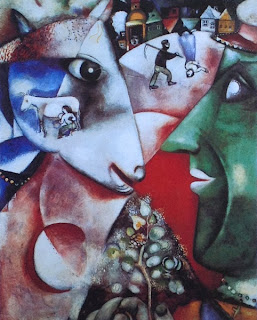 I've always been intrigued by this painting of Chagall's with its geometric circles, arcs, triangles, and though this painting is not in 'My Life' it resonates with his love of geometry.

There is so much more in this book about his life in Paris and the very difficult period he spent back in Russia when he found himself unable to return to Paris because the first World War had started in 1914 and he was only able to return to France in 1922.  If you are at all interested in Chagall and his paintings, I'm sure you would enjoy this strange little book as much as I did.

ARTWORK ..... well I apologise for offering a very unfinished piece of artwork.  Things have been a bit difficult this last month and very busy, and I also apologise for not visiting everybody's June review because of this.  I'm determined to visit everyone this month.

The A4 sketchbook page below is my response to not just the book but my immersion in Chagall recently.

This is NOT a copy of one of his paintings, it's me quickly putting down on paper rough drawings of some of his images starting with the main figure, The Juggler, whose strange position fascinates me.  If I tried that I'd definitely fall over.  Then I changed details, then turned the twisty lady into a mermaid, gave the fish seaweed instead of a bunch of flowers, added bits here and there, and Hey Presto there's something quite unlike my much slower way of working and unlike anything I would normally draw - my vision of a strange circus.  I hope Chagall will forgive me.

I want to colour this somehow - unfortunately the sketchbook paper is not strong enough for watercolour, so it needs some thought, and there's so much detail that it's going to take me ages.  But I'll do it bit by bit over time.

If you are near enough to visit the Tate Liverpool's exhibition of about 60 of Chagall's works, then I recommend it.  Check on the dates (on until October I think) and entry cost first.  Thanks for bearing with me.  Jez

Also linking with Jenn's challenge of producing a black and white line drawing for Artists Play Room - sheer serendipity that this theme appeared just after I had posted my July review!
Posted by Jez at 11:09