STRUGGLING WITH ANOTHER TUTORIAL TRYOUT


Life's not easy.  Give me back my pen, my markers, and my Inktense pencils, they do what I ask them to.  Once again I was out of my comfort zone with my efforts this week for Kristin Dudish's Tutorial Tryout - but then, that's the whole purpose of doing it..

Still, I produced something, even if it was rather different from the tutorial, learnt something on the way, and produced a variation on the themes that I can investigate further.

So all in all, it turned out to be quite successful.

Rather stumped with this one right away because the resist used was Krylon Foil.  This was new to me so I Googled it but was still rather stuck because in spite of the name 'Foil', it seemed to be a spray paint.  Not something I have on my art shelves, but when in doubt do something different to try to match the tutorial.

Since it seemed to be a spray paint I decided to use a white pearlised acrylic paint instead, and painted this through a simple stencil I had made.  I made a few versions using shiny card, ordinary card, and paper, and the following few examples show the more successful ones, after they were completed.

This yellow one above was done in the same way, but using much less paint for the stencilled shape.  When the stencilled paint was dry I painted the whole piece with watercolour paint, using Quinacridone Gold, a rich yellow that is one of my favourites, shading from an orangey-brown down to a really goldy yellow.

This blue one was also on shiny card, varying the amount of paint used for the stencil
and over-painting with ultramarine and cobalt blue watercolour.
Then I thought I would jazz it up with lots of drips.

I like this particular section of the drippy blue version.

For this red and yellow version with another of my own stencils
I surrounded the acrylic design with a resist of white candle wax
- the stencil pattern shows up the same colour all across
- just bad lighting for the photo.

Every finished piece I did produced a quite unexpected result, and will prove useful for something like a collage background.  I was interested in the results, and felt they were worth the effort of struggling how to replicate the concept of the Krylon Foil.

I was not quite as successful with the Vaseline resist technique, but I'm always prepared to exhibit my failures - MY failures, not the fault of Julie Fei-Fan Balzer, who demonstrated the technique.


The first two efforts were rather disappointing. 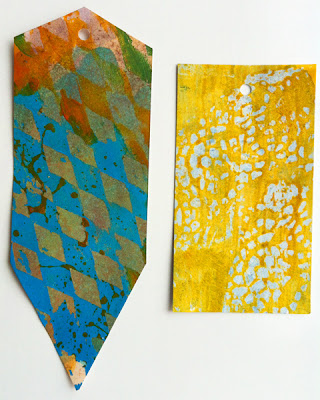 I stencilled the Vaseline on 'leftover' pieces of light card
that had already been painted,
one with various colours, overpainted with blue, yellow and green acrylic
and the other with pale blue, overpainted with yellow.

On the plus side the technique wasn't quite as messy as I had feared, but before I started I wondered whether it would produce a finished piece that didn't have any greasy residue.

In the end, when I had overpainted the resist and wiped away the Vaseline I found that it had dulled down the colours, turning the diamond shapes a mucky grey.  A little disappointing.

Perhaps I didn't follow the instructions correctly because even though I wiped the Vaseline away as much as I could the whole card had a rather greasy feel to it.  Once again, my failure not the tutorial.  This last one below left me feeling happier. 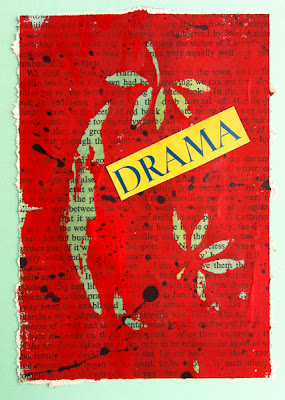 For this one I used a page of an old book which I had at some time painted green, and mounted the finished piece on a piece of matching green card, and I was happy with it.

Check out Kristin's blog for the details about Julie Fei-Fan Balzer's Vaseline Resist and Christine Adolf's Krylon Foil Resist techniques and the generous artists who created the tutorials - thank you ladies I appreciated the tutorials and happy that I worked through them.