This is one of those 'coincidence' posts.  I had made some monochrome prints for Kristin Dudish's Tutorial Try Outs on Tuesdays, and had decided to complete some of them with red.

Then I checked out this week's theme for Artist's Play Room and found we were to follow Tracey Fletcher's lead a few weeks ago of Blorange (a combination of blue and orange) and invent a name for two colours we like to use.

I love working in black and red so I chose BLARLET.  It should really, of course, make the word Bled, or perhaps Bred, but neither of those is very interesting and have other connotations.  So I stepped sideways a little and combined BLACK and SCARLET to use for my prints, and this will also be my entry for Artist's Play Room this week. 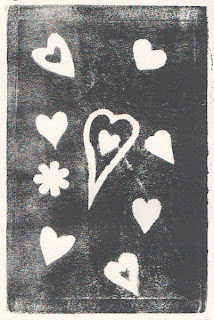 You know those students who take a serious interest in everything a teacher is saying - and then go and do something different.  Here I am, guilty of just that.

The excellent tutorial was about gelatine printing.  I enjoyed the tutorial, but realised straight away that I really don't have the room or the facilities or even the time to try this type of printing.

Now taking a course or following a tutorial is really about learning something new and stretching oneself.  The gelatine seems to give a soft base, so I decided to find something I already had that would be softer than the usual printing plate, and came up with a kiddies pack of A5 foam sheets.  I taped a sheet to card with masking tape and set to.

I chose black because my first attempts with acrylic paint dried too quickly (and I was too lazy to mix it with flow improver as a retarder).  The only printing ink I had left was a tube of black, so that's when I decided to go with Blarlet, using a new foam sheet, and just make monochrome images.

For an inking-up sheet I used a paper palette with special shiny sheets made for using acrylic paint.  This saved some cleaning up at the end because I could just fold up the used sheet and put it in my waste bin.

I made about 30 prints, some OK, some reasonable and some failures, and the ones I show in this post are just a few that I was fairly happy with.  I like the way the masking tape forms a border around the prints, and in some cases I left it as a border.

This is the Blarlet version:

The printing was done yesterday, and today I had hoped to add the red with paint or pencils, but time being what it is, in the end I decided to cheat and add the colour on Photoshop.  I can always add the colour by hand another day.

I kept trying different materials for the masking pieces, and some proved less successful than others.  I can see that one advantage of the gelatine print seems to be that it is so soft that things like twigs sink into the gelatine and make a good image, whereas they didn't sink into the foam as successfully.  Even these stencils I made from thin card didn't show all the detail when I printed.

The images above show the first and second pulls - and I often like the second pull better than the first.  Here's the Blarlet version:

Again, I left the masking tape border - or at least most of it.  This has been over-cropped.  I like the contrast of the golden slipper with the black and red. 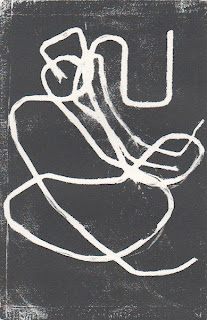 Some of the images were printed on thick white cartridge paper and others on cream.  I tried colouring the faces red but it didn't work, and I like the monochrome for the 'conversation piece'.  The ribbon print was not too successful, and I think I have posted it upside down, but I've included it because given more time it should be possible to make a better print.

The ribbon really stands out in red against the black background.

At this stage I experimented a little more, and placed a screwed-up-and-opened-out piece of cling film around another foam sheet, which I taped to card as well as I could.

The image isn't marvellous, but I can see that it has possibilities.  The print above has a look of a mysterious wood, so I'm quite pleased with it.

This was my last print.  It's  certainly different, and has a lot of movement.  The face mask was added just to see if it was possible to mix masking with the cling film, and it is.  More there to experiment with some time.

I wanted to experiment more with the cling film approach, but energy levels had dropped and I was tired - didn't even clear up much which I always try to do.

So, I'm sorry I didn't actually use gelatine, Kristin, but watching the tutorial did make me use a couple of printing methods I hadn't tried before, but that I will include in my printing 'armoury'.  And I've got plenty of prints that can be used in collages, etc.  So altogether I'm very glad I took the plunge.

Check out Tutorial Try Outs on Tuesdays here, and have a look at the Artist's Play Room in a few days for some great images.