BLACK AND WHITE AND RED ALL OVER

I mentioned in my last post on Tuesday that for various reasons I had 'lost my mojo'.  (I've just looked the word up.  It means magic, or a spell, and is probably of West African origin.)

So over last weekend I decided to step back, forget about all the arty things I needed to do and play about instead with some bits of collage that I didn't care about if they came out useless.  I decided to focus on black, white and red using postcard sized watercolour paper.

When I was a child a standard riddle we'd ask each other was 'What's black and white and red all over?  Answer, a newspaper'.  It doesn't really work now with colour printing in our newspapers. 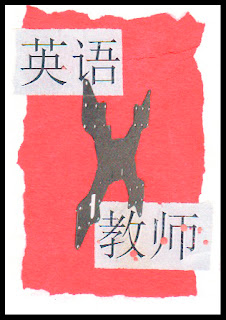 For the first one I used red tissue paper, slightly wrinkled to give it texture.  I don't know what the Chinese writing says, because I tore the piece from an old, tattered poster in Liverpool.  I hope it's polite.  I liked the simplicity of the black shape. 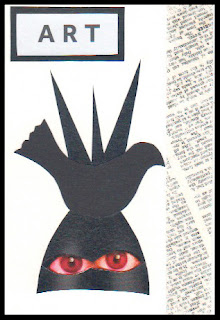 What I like about simple collages is the way one just cuts out a few images, or shapes from paper in a magazine, adds a word or two and suddenly it comes together without any great thought.

The strip at the side of this one is a piece of sellotape accidentally stuck onto an old book page some time ago when I was making something else.   When I lifted it off, it brought the writing with it and I decided to save it for later use.  It seemed right for this, and just in case nobody realised the collage was Art with a capital A, I added the word to make it clear. 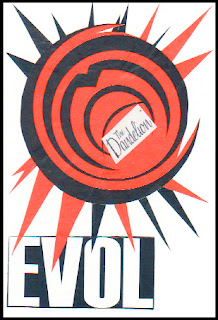 The central round shape on this one was cut from an advertising postcard I picked up somewhere, I don't remember where.  It looks like something a pop group might use as a logo, but as the text was written in Polish I wasn't able to read it, so I apologise to them for not crediting.

I liked the word EVOL I found printed in a magazine.  It gives me the feeling both of love and of evolution, or even evil.  The dandelion word is added to cover up the name in the centre.  Another result that pleased me. 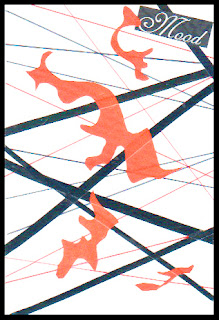 This one has scanned a little orangey, but it is actually red.  I started with a few lines drawn across the postcard with a very fine pen and then added the black strips cut from a black section of a magazine page.  The lines I cut were so narrow and the paper so thin that it was a pain trying to stick them on.  The rest simply came together when I found a magazine picture of a car and there was a limited amount I could cut from it.  I like the final effect, it gives a feeling of depth, as if the red shapes are floating above the network of lines.  Happy with this too. 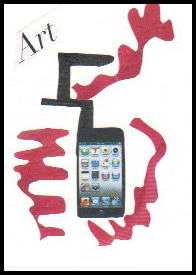 This is an ATC.  When I cut my watercolour paper into 6 postcard sizes, there was just enough left over for 2 ATCs.  Quite pleased with this. 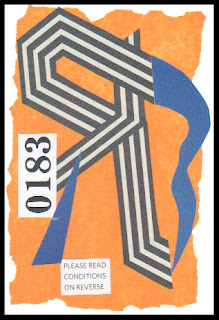 The black and white lines for this last effort came from a wallpaper design in a magazine, and I cut out the only two pieces that made a continuous line.  Red didn't work with them somehow, so I abandoned my concept and tried other colours.  The shapes looked so good on a piece of orange tissue paper and then of course it called for some blue as a contrast.  The little notice reads 'Please read conditions on reverse' - but in fact the reverse is blank. 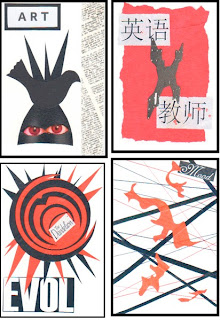 Here's a montage of the four black, white and red postcards.  The change of activity and working without trying to meet some pre-determined goal was so restful.  And feeling pleased with each one as I finished it gave me a real boost.

Stepping back like this is good for bringing back the mojo, and with a fresh mind I was able to complete my set of challenges that I posted on Tuesday in no time.  All your encouraging comments on Tuesday's post are appreciated so much.  I try to get back to your blog, but August has been a particularly full month of unpleasant hospital appointments between the two of us, and September is beginning to shape up the same way, so I've not been able to visit and comment as much as I'd like.


Keep happy, keep making art, and enjoy every moment of the day as best you can.

Email ThisBlogThis!Share to TwitterShare to FacebookShare to Pinterest
Labels: COLLAGE